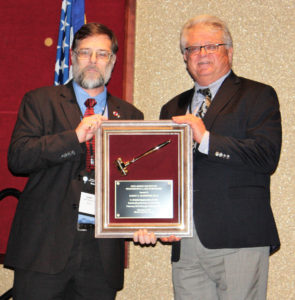 On February 2, 2017, Carl E. Peters, PLS, PE, PP became the President of the New Jersey Society of Professional Land Surveyors (NJSPLS). Peters took over from Barrry Gleissner, PLS who served the organization as president for the past two years.

The purpose of NJSPLS shall be to maintain and perpetuate an organization for members having common professional problems and interests, to provide effective forums for discussion and united action on the part of its members, for the enhancement and betterment of professional recognition, and for other matters of common welfare.

Among the objectives of NJSPLS are:

NJSPLS scholarships are available for students who are pursuing a career in land surveying. Applicants must be New Jersey residents studying in a Bachelor’s or Master’s degree in Land Surveying or a related field. Some of the recent NJSPLS scholarship recipients have been full time students while others are getting their education while working full time. The  NJ Land Surveyors organization offers these awards on an annual basis. Award recipients may continue to apply during their academic career.

One of the societies current goals is to inform the public about the practice of Land Surveying and to inform young people of the opportunities for well paying careers as a Professional Land Surveyor but also as a technician performing field measurements or computer mapping services. 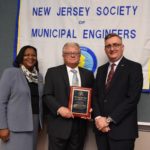 Peters, who is Past President  of the statewide municipal engineering group, was honored for his: “Outstanding contribution as author of the NJSME ‘Analysis of NJ’s Municipal Road Repair Needs’ … and publishing the report as the State addressed TTF (Transportation Trust Fund) reform”.

Peters, who was the NJSME president in 2007, was the Municipal Engineer for the former Borough of Princeton from 1984 – 2007. He has remained active with the New Jersey Society of Municipal Engineers since leaving public employment. He has served on both the Executive Committee and Advisory Board and is also an instructor in the society’s Certified Municipal Engineer (CME) program.

Peters provides training to professional engineers about New Jersey’s Municipal Land Use and Construction Code regulations. His class is part of a ten day program of courses developed by NJSME. The program’s mission is to educate engineers about the broad range of topics required to practice as a municipal engineer.

Peters is currently in private practice with an office in Fords, NJ. He provides consulting services in the areas of land use, construction code analysis, handicapped (ADA) access and litigation support.

Peters, Peters and Gordon to present paper at TRB

Carl E. Peters, P.E., and co-authors Jonathan R. Peters, Ph.D. and Cameron Gordon, Ph.D. will be presenting their paper “Who should pay for the local street? Who does? A survey of New Jersey municipalities” at the annual meeting of the Transportation Research Board in Washington, DC, in January 2017.

How Much Does It Cost to Maintain New Jersey’s Local Streets?

The paper, which is based upon a study the team performed for the New Jersey Society of Municipal Engineers, quantifies the cost to keep New Jersey’s local streets in good repair. The report establishes the cost to maintain an average mile of a local street in New Jersey for a sixty year life span, It then projects the annual repair repair cost for all municipally maintained roads by multiplying the cost per mile by the total length of streets in municipal jurisdiction. The resulting annual need is a staggering $1.2 billion.

How is Transportation Funded in New Jersey?

The paper includes an analysis of the current revenue sources available for the upkeep of municipal streets, along with State and County roadways and New Jersey Transit.

The New Jersey Department of Transportation (NJDOT) 2010 listing of roadway mileage by jurisdiction shows that approximately 29,000 of the state’s 39,000 miles of roadway’s are maintained by municipalities. In 2014, State and Federal Aid to municipalities for local street repairs was less than $100 million. The remaining revenues to fix local streets must come from municipal budget sources, primarily property taxes.

Only about 3% of New Jersey’s Transportation funding from state and federal sources is distributed to municipal governments.(see graph below for the period 2006 -2016), 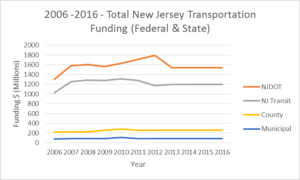 New Jersey Department of Transportation records indicate that in 2014 approximately 15% of average daily traffic was carried by local streets.

The network of New Jersey’s municipal roads is extensive. Most vehicular trips have either an origin or destination on a local street. Local streets serve emergency services, commerce and other regional travel. Municipalities must maintain over 70% of New Jersey’s road mileage. These local streets carry over 15% of the vehicular trips per day. While noting that State and County roads are generally wider and carry larger volumes of truck traffic, it appears that New Jersey’s municipalities are being shortchanged when it comes to the distribution of funds for transportation.

What does the future hold for funding of local street repairs?

This paper has identified that we have much work to do to address efficient funding for local streets, sidewalks and curbs in particular. It is clear that the deferred maintenance and ongoing investment challenges are extensive and that the funding gap is massive. Yet these needs are largely ignored on the state and federal level; thus these costs and problems are left to the local governments. Like many state and federal unfunded mandates, the local governments then have to struggle to find funding sources to address problems that are not always just local in scope.

On Tuesday afternoon Carl will be manning the NJSPLS booth #1803. Please stop by to discuss any land surveying questions that you have.

On Wednesday, Carl will be participating in an assortment of NJSME functions including: the Past President’s breakfast, the annual business meeting, the awards luncheon. At 2:30, in Room 313, he will be attending a joint meeting of NJSME and the Institute of Local Government Attorneys – an annual program which always sparks a lively discussion. He will conclude the day ant the annual meeting of the NJ Planning Officials in Room 314.

A discussion of Change Orders, Contract Closeout and Bid Documents will be held at 10:45 in Room 309 at a joint meeting of NJSME and the Governmental Purchasing Association of NJ.

Please e-mail me at cpeters@carlepeters.com if you will be attending the conference and would like to chat.

New Jersey’s municipalities need help. They’re in need of an adequate, steady source of funding for their road repairs. A recent report prepared for the New Jersey Society of Municipal Engineers estimates the annual need for municipal road repairs at almost $1.3 billion. New Jersey’s municipalities, who are constrained by a 2% tax cap, cannot adequately maintain their streets without both more funding from the Transportation Trust Fund (TTF) and a more equitable way of sharing those revenues with the counties.

Local Aid to Municipalities is Meager

Unfortunately for Municipalities, they are at the end of the line when it comes to distribution of revenues from the Transportation Trust Fund. For the past ten years New Jersey Municipalities have received only about 3% of the state’s transportation funding (see graph below).

This fact is especially troubling to local Mayors, Administrators and Engineers who are responsible for the maintenance of New Jersey’s more than 29,000 miles of municipal roadways representing 75% of the centerline road miles in the entire state.

State and Federal Aid to Municipalities and Counties

Since 2009, annual allocations of $78.75 million each have been made for County and Municipal road repairs. The counties have also received $25 million annually for bridge maintenance (a task that is predominantly a county responsibility). Counties also get a much larger share of federal aid – $140 million annually, while municipalities get only $10 million annually.

Unfortunately for municipal governments, this cost sharing formula does not reflect the actual cost to maintain New Jersey’s Municipal Road network. Ideally, municipal and county governments should receive sufficient state and federal funding so that the portion of road repair costs financed through property taxes is similar.

The New Jersey Department of Community Affairs reports that the state’s 2015 property taxes were distributed as follows:

Cost Split based upon Road Mileage

One option would be to apportion TTF local aid revenues between counties and municipalities based upon the length of roads within each jurisdiction, or:

County Freeholders, Engineers and Executives would likely argue that such an allocation of funds was unfair – since county roadways are often wider and carry greater daily traffic volumes than do municipal streets. Such factors increase construction costs and the needed frequency of road repairs.

It may, therefore, be fairer to establish a method of sharing local aid that considers traffic loads as well as roadway length and also gives county roads a mileage bonus to account for their greater average width.

In this alternative, each of these two components for the sharing of local aid – Traffic and Weighted Mileage is used to allocate one half of the local aid funds.

Local Aid Sharing  Formula based upon both Traffic and road inventory

What do you think?